Does the German "lockdown"[1] endanger millions of children around the world? Tübingen's Mayor Boris Palmer (Greens) had provoked at the end of April: "The shutdown, as we operate it, tries to prolong the lives of very old, seriously ill people in the rich countries and costs the lives of a much larger number of children in poor countries".
Is this true?
As lively as the general outrage about Palmer's thesis was, the connection "lockdown here, dead children there" prima facie cannot be dismissed. After all, Germany is an important part of the globalised economy, closely interwoven in world trade and an important donor nation. And that child mortality continues to be a major problem for the international community of states can be seen, for example, in the 17 Sustainable Development Goals (SDGs). The SDGs are political objectives of the United Nations (UN), which are intended to ensure sustainable development worldwide at the economic, social and ecological level. And in particular goal 3.2 - the reduction of global infant mortality to a maximum of 2.5% of all newborns five years after birth by 2030 - was already far from the target set before the Covid pandemic[2], well before the target came into force in 2016. 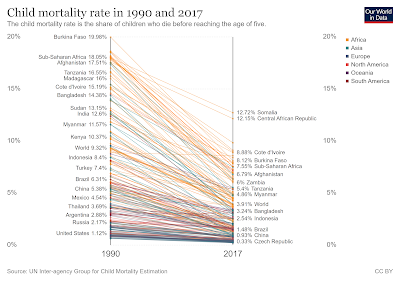 But a closer search for clues proves (without reference to the dubious morality of his claim): Palmer's thesis is wrong, and in several dimensions.
1.        Palmer refers to a new UN paper from April of this year. However, the authors of the paper do not present any empirical evidence and also note themselves that this will only be possible later. In addition, the assumptions made in the study about the link between Covid-19 and pandemic-induced excess mortality of children in poor countries are limited to three impact channels, which are also quite plausible: increased susceptibility to morbid virus infections, overburdening of local health care systems[3], and jeopardizing the UN Agenda 2030 with its 17 goals for sustainable development (SDGs). But: The UN document does not mention the lockdown, it is even recommended (on page 15)!
2.       Neither Palmer nor the UN study explicitly mention the so-called poverty elasticity in developing countries as a function of the growth of the rich countries[4]. The sequence of effects would be indirect: the stringency of the lockdown reduces GDP in the rich countries, on which GDP growth in the poor countries depends[5]. In the poor countries, the elasticity of poverty in turn determines child mortality, at least below a certain income threshold. However, the poverty elasticity of growth in developing countries depends even more tightly on the inequality of income and wealth there. If Palmer had read the recent study by the prominent African economist Augustin Fosu[6], he ought to have known that.
3.       Lockdowns to contain the spread of the virus have immediate and dramatic effects on daily economic activity. The impact on GDP will depend on how long the lockdowns last and how stringent they are. By way of illustration, a two to three-month crisis with a five-week national "peak austerity" that reduces GDP by 20% per day would result in a 7% to 8% decline in quarterly GDP, Fitch rating agency recently estimated. However, lockdowns and changing consumer habits are not easy to separate: Sweden, for example, is also experiencing a dramatic slump despite liberal Covid policies. Economists at the University of Copenhagen have found that lockdowns have had little impact on consumer habits and that the real damper on buying activity is fear of the corona virus itself.
4.       What is the prevention paradox for public health corresponds to the Global Public Good in the interdependent world economy (Quah, 2020)[7]: a preventive measure that has a high benefit for the population and communities often brings little to the individual and vice versa. Historical evidence from the 1918 Spanish flu, analyzed by the Federal Reserve Bank of New York[8], shows that those US cities that continued to experience higher employment growth in manufacturing after that date also had lower mortality rates due to the epidemic. Importantly, they introduced tighter public health interventions in the form of physical distancing, quarantine and lockdown. Strict preventive measures have a high health benefit for the population as a whole, but harm individual interests. Therefore, a loud minority rebels against public health measures which, paradoxically, are acceptable in their own interests.
The search for clues thus reveals that Boris Palmer has quoted the UN study incorrectly, misjudging important causal relationships between our prevention measures and child mortality in the poorest countries and ignoring the prevention paradox. Palmer was wrong in his provocation, not only morally. After all, in the pandemic, strict prevention measures are ultimately the least harmful way for the economy, in rich countries and elsewhere.


[1] Mind you, the term "lockdown" has not applied to Germany in the corona crisis so far. Germany does not have a lockdown, but contact restrictions and school closures. The Blavatnik School Covid Stringency Index, a composite of 13 individual indicators (e.g. curfews, stops of public transport, closures of restaurants, schools and stadiums) has always been well below the levels of the top stringent Italy, Spain and France.
[2] Max Roser (2019), Child mortality: achieving the global goal for 2030 would be a huge achievement – but we are currently far away, Ourworldindata, Oxford U, 23. April.
[3] Simulations by the Johns Hopkins Bloomberg School of Public Health have confirmed the importance of the state of health systems for child mortality in poor countries. Another major determinant is malnutrition. Cf. The Lancet, May 12, 2020.
[4] The growth elasticity of poverty (GEP) is the percentage reduction in the poverty rate (PR) associated with a percentage change in mean (per capita) income (y): GEP = - (d%PR/d%y).
[5] Note that the poorest countries' dependence on China for growth has exceeded their dependence on OECD countries for the past two decades. Cf. Chris Garroway et al. (2012), „The Renminbi and Poor‐country Growth”, The World Economy, Vol. 35.3., S. 273-294.
[6] Augustin K. Fosu (2017), “Growth, inequality, and poverty reduction in developing countries: Recent global evidence”, Research in Economics, Vol. 17.2, S. 306-336.
[7] Danny Quah (2020), Keeping people from dying is good for business, medium.com, 18. May.
[8] Sergio Correia et al. (2020), “Fight the Pandemic, Save the Economy: Lessons from the 1918 Flu,” Federal Reserve Bank of New York Liberty Street Economics, 27. March.