The Renminbi and Poor-Country Growth

China’s current account surplus over the recent two decades can be well explained by structural savings determinants.  Song, Storesletten and Zilibotti (2010)[1] have have stressed the role of rising corporate savings due to reallocation within the manufacturing sector from low- to high-productivity companies. Wei (2010)[2] explains rising China’s household savings with gender-imbalances. Still, large appreciations do impact the current account and - in developing countries -  do depress growth (Keppler, Reisen, Schularick and Turkisch, 2011)[3], as evidenced by data over the past fifty years.
Renminbi effective exchange rate index, 2008 - 2011 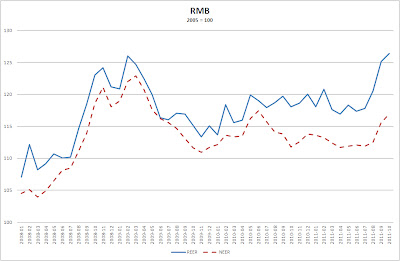