When Is the Right Time for China to Be Europe’s White Knight?

Global stock markets were enthused today by People Bank of China’s Governor Zhou who had said that China will play a bigger role in solving Europe’s problems via the IMF and the EFSF. He also added that BRIC countries are waiting for the right time to help Europe.
It is hard to tell whether China is now more prepared to play the ‘white knight’ for Europe or whether these are the usual niceties expected at the EU-China Summit. Only time will tell if these words will turn into action. Zhou’s comments were similar to those made by Premier Wen when Merkel visited China at the start of the month. The Chinese leader was then quoted to having said “China is investigating and evaluating concrete ways in which it can, via the IMF, get more deeply involved in solving the European debt problem through EFSF/ESM channels”. However three days ago China’s sovereign wealth fund (CIC) said that any fresh injections of funds into Europe would be in industrial and other real assets, not government bonds.
The Chinese leaders have to be cautious. The CIC's ill-timed investment in the leading private equity firm Blackstone in 2007 was heavily criticised in China. According to IMF data, the per capita income (GDP PPP adjusted, in current international dollars) in 2011 was  31,548 in the European Union, but only 8,394 in China – just a fourth. So these numbers translate into the widespread apprehension that a poor country would support a rich(er) region. What is even more: China’s relatively low per capita income is unequally distributed.  The Gini index of income inequality has risen from 30 in the early 1990s to 40 in the 2000s. And while absolute poverty has fallen strongly in China over the past decades, relative poverty, as indicated by the solid line (share of people earning less than 50% of the median income) in the graph, has slightly increased. So any foreign investment of the massive assets that China has accumulated in its central bank reserves and sovereign wealth funds must be compared to the social return of local investment. In other words: The social shadow cost of helping Europe have risen. From the social perspective, the right time for China to invest in Europe is when it has caught up with European per capita income and when the income is more evenly distributed across people and regions.
Absolute and Relative Poverty in China 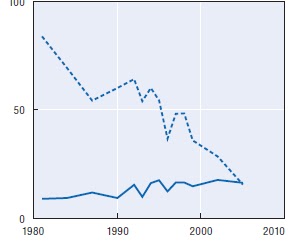 Source:  http://dx.doi.org/10.1787/888932518180
Clearly, there are other parameters for the timing of Chinese investment in Europe. Perhaps, the Chinese authorities think of the sustainability of the Eurozone when they talk about “the right time to help Europe”. Mario Draghi and ECB’s long-term refinancing operations (LTROs) have been very good news for the Eurozone and brought down risk spreads of Eurozone government bonds, for now, by allowing banks to borrow at roughly 1% and buy government bonds that yield much higher returns. But as Prof. Charles Wyplosz reminded us in the latest of his excellent Vox entries, Draghi’s “clever move falls short of bringing the crisis to an end. Much more remains to be done. Greece and Portugal will be unable to grow with their existing debt burden – and this may also be the case for Italy and other countries as contagion takes hold”.

LTROs effectively eliminate the risk of illiquidity, but they do not address the risk of insolvency. The balance sheets of Europe’s (especially French, German and Spanish) banks are too precarious to allow write-offs to sustainable debt levels in Europe’s periphery, say toward 60% of GDP.
Conclusion: The right time for China to be Europe’s White Knight is once Europe’s banks really have written their claims on peripheral Europe’s sovereign debt down to sustainable levels, 60% of respective GDPs, that is.
Posted by ReibReisen at 12:15 No comments:

Email ThisBlogThis!Share to TwitterShare to FacebookShare to Pinterest
Labels: China a White Knight?

The Denial of American Decline and the Fetish of Manufacturing 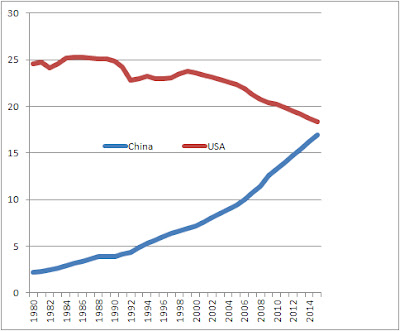 Robert Kagan’s essay, “The Myth of America’s Decline”, has been seized like a straw by Barrack Obama, according to FT author Edward Luce’ “The Reality of American Decline”.  At the State of the Union on January 26, President Barack Obama argued, "Anyone who tells you that America is in decline or that our influence has waned, doesn't know what they're talking about."
As for net investment abroad, the switch in world leadership from US to China has been much more impressive. So have its consequences; recommended reading: “The End of Influence: What Happens When Other Countries Have the Money”. But the big risk is that the new US inferiority complex turns the Americans into industry Colbertists, harming the global convergence process underway by interfering with free trade.
A new paper by Benjamin Mandel of the New York Federal Reserve Bank “Why Is the US Share of World Merchandise Exports Shrinking?” shows that the US share of world merchandise trade dropped from 12 to 8% over the past decade; the respective share for services even dropped from 25 to 6% during the same period.
Both compositional effects and faltering competitiveness explain the delining US share in world exports. The commodities sector was one of the primary drivers of the decline, yet its contribution to export share losses largely derived from the declining weight of commodities in the world export basket as well as the price fl uctuations of these goods. Corn and soybeans were the wrong products to gain market share with in the 1990s, as prices tumbled and income elasticity of food items were low. The growing appetite China’s for protein-rich food may well turn US food exports from laggard to  driver. That said, the United States did experience large declines in share in machinery, transportation products, miscellaneous manufactures, and chemicals.
With such numbers in mind,  President Obama asserted at his recent State of Union address : “We will not go back to an economy weakened by outsourcing.” But: Not outsourcing jobs to locations with lower labour unit cost not only harms the world’s poor but risks losing the jobs withheld in rich countries, too. (Germany’s celebrated competitiveness is quite related to outsourcing of the standardised components of her manufactures). Obama also celebrated manufacturers: “Tonight, I want to speak about an economy that’s built to last - an economy built on manufacturing.” In his “Shame on You, Mr. Obama, for Pandering on Trade”, Professor Jagdish Bhagwati points to the fallacies in Obama’sproposition, and to the risk to the world trading system emanating from the United States:
·         The general disillusionment with the financial sector has been seized on by the manufacturing lobby to argue that therefore manufacturing should be supported. Bhagwati rightly asks: “Why not opt for DHL, transport and communications, for example, instead of cement mixers?”
·         Over time, manufacturing yields to services. This gigantic change that is taking place has nothing to do with outsourcing.
·         The notion that manufacturing is more productive than services is not supported by research. The range of modern services that can be digitised and traded globally is constantly expanding. (India has been a pioneer, but many other poor countries are finding it easier to generate productivity growth in services than in industry.) Services expansion provides an alternative growth escalator.
Watch out when empires start drowning… They might desire to leave the earth scorched.
Posted by ReibReisen at 18:08 2 comments: