The Benefits and Costs of Shifting Wealth to OECD Countries

The term ´Shifting Wealth´ has been criticised for conveying a dangerous notion of zero-sum game; dangerous because the rise of protectionism and nationalism in some OECD countries risks bringing the rise of emerging countries and the corresponding meltdown of global poverty to an end. ´Shifting Wealth´ is a shorthand term to describe the gravity shift of the world economy toward the East and the South, in terms of flows (GDP share, South-South trade and finance) and of stocks (changes in net foreign assets, built-up of reserves and SWF assets)[1]. Zero-sum mentality has it that lower poverty in China and in the developing world causes poverty to rise in advanced countries, for example in the United States. Rather than taking satisfaction in global economic development and the unprecedented business opportunities and new jobs it brings also to the OECD, economic growth in the South is regarded by some as a threat. The real threat, however, is a global trade war.

What is often missed in analysing globalisation is that the rise of emerging countries has gone and is still going through three distinctive phases. Policymakers risk foregoing the benefits of globalisation because they react to the first opening phase of the 1980/90s while important wage and price trends are now being reversed as a result of changes in the global labour supply and of China´s fast transition to a ´New Normal´.

The benefits of ´Shifting Wealth´, including to the OECD, are well rehearsed. The rising living standards that came with globalisation initially lent widespread support to the view of trade as a key engine of economic growth, North and South. The expansion of global value chains (GVCs) became a strong driver of productivity, boosting intermediate trade – a boon for OECD producers of equipment and consumer goods. Formerly poor countries used their exports for higher consumption and thus imports, not least for OECD-based luxury brands. Intensified specialisation meant an improved allocation of resources also in OECD countries, with capital and jobs shifting away from their least competitive uses and lowest added value toward higher-income sectors. Consumers in the OECD benefitted from a higher purchasing power of wages as low-skilled goods prices dropped. They also enjoyed more product choice. The deterioration of China´s terms of trade through the mid-2000s indicated that China´s exports made the world better off[2]. Improvements in the range and quality of exports, greater technological dynamism, better prospects for doing business, a larger consumption base – all these factors have created substantial welfare benefits for OECD countries. Overall, Shifting Wealth is a win-win setting.

The problem is that the benefits of Shifting Wealth have been unevenly distributed. Many of the major economic trends of our time - globalisation, digitisation and robotisation - are good for society on average, but not automatically good for everyone. Especially in the labour market, they also generate losers. Besides the fear of mass immigration, these globalisation losers can play a decisive role in the rise of populism. An appropriate policy answer in advanced countries requires a sound diagnosis that distinguishes three phases of globalisation.

The first phase of Shifting Wealth in the late 20th century went along with low-skill wage pressures and higher returns to capital in OECD countries, giving impetus to Piketty´s r>w[3]. The opening of China, India and the former Sovjet bloc had effectively doubled the pool of low-skilled labour. The shape and speed of the newcomers´ integration into the world economy then depended importantly on the transfer of labour from mostly rural low-productivity areas to mostly urban high-productivity sectors. A core model of economic development, the Lewis[4] or surplus labour model, provides the analytical tools: The modern sector – and by extension the world economy (!) – faced for a while an ´unlimited supply of labour´ at wages not far from the subsistence level. As predicted by the Stolper-Samuelson theorem, the labour supply shock led to a drop in the price of wage-intensive goods that caused a reduction in the equilibrium wage or, alternatively with low wage flexibility, job losses.

While unemployment in certain sectors or regions in OECD countries have resulted to a large extent from technological changes rather than from trade, the two drivers are not always easily disentangled. In the OECD countries, both globalisation and technological change affect a middle class that is often marked by industry, which has lost its good jobs or is afraid of imminent job losses[5].

That it is the middle class in OECD countries that has been affected by the initial labour-supply shock has theoretical and empirical support. Krugman (1994) has shown early on that competition will ensure the ratio of the wage rate in the OECD area to that in China to equal the ratio of labour productivity in those sectors in which workers in the two regions compete head to head[6]. Poor countries produce low-tech goods more cheaply, and the fall in the price of those goods will raises real wages in the OECD. So in the past, surplus labour in China and elsewhere has benefitted in particular the low-income segments in the importing countries as low-tech products weigh relatively heavily in their consumption. The key problem, however, for the middle class is the structural change that results from trade pressures in intermediate sectors. Some of these sectors, such as textile, steel and electronics have been shrinking in the OECD as a result of Shifting Wealth.

The empirical evidence that the distribution effects of globalisation and technological change have put a strain on the OECD middle-class has been provided by the “elephant graph” in a paper by Lakner and Milanovic (2013)[7]. The graph shows income gains at each point of the global income distribution for the 20 years spanning the fall of the Berlin Wall to the 2008 financial crisis. The graph has recently been updated for the World Inequality Report 2018 by a team of Berkeley and Paris School economists for the period 1980 to 2016. They identify the trough of low growth with the bottom 90 percent in the United States and Western Europe (the global 50-95 income percentile), while higher income growth has been appropriated by the Asian middle class and the global top 1% income group[8]. The affected middle class in the OECD constitutes a lot of frustrated voters…

The second phase of Shifting Wealth, from 2000 to the 2008 Global Financial Crisis (GFC), saw pervasive convergence of poor countries largely due to increasingly China-centric growth and higher raw material prices. While oil and metal producers benefitted, the majority of OECD countries, being net commodity importers, suffered terms of trade losses. Simultaneously, as a result of reversals in the current account of balances of payment, net foreign assets positions morphed: China and oil producers extended their net credit whereas the US net foreign debt position bulged. As global trade became increasingly imbalanced, China became singled out as a currency manipulator and predator. Deindustrialisation in some OECD countries became wrongly attributed to external deficits. However, it was not ´Shifting Wealth´ that caused US deficits on its current account. During the 2000s, current account surpluses of around 100 countries had largely arisen in response to the US current account deficit – the excess of US investment over US savings.

As a result of its external deficits, the US risked losing economic, political and normative influence on the world stage. In other words, it risked to become a ´normal´ country, frustrating those who claimed its exceptionalism[9]. To be sure, there are some global zero-sum settings. A rebalancing of influence toward China & Co. has seen the relative weight of the advanced countries diminish; and there are pressures for a redistribution of the stock of global commons, particular in relation to climate change and extraction rights for exhaustible resources. 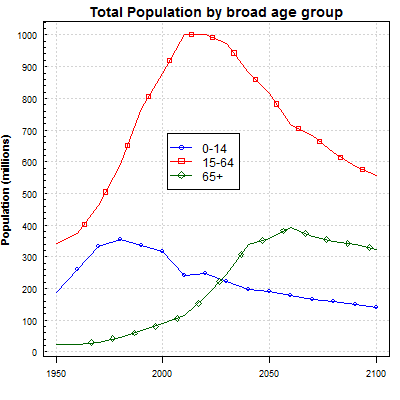 The third phase of Shifting Wealth has since the 2008 GFC witnessed a reversal of these trends in the terms of trade as China is transforming its production and trade patterns toward consumption, away from investment and intermediate GVC trade. As China´s formerly ´unlimited supply of labour´ has been largely absorbed and its population is ageing rapidly, and as India´s fertility rate has come down, the growth of global labour has peaked[10]. China´s working-age population is projected to shrink by 400 million in the 21st century (see Figure 1). Sub-Saharan Africa and India can numerically offset these demographic trends for the next couple of decades. Economically, the offset is much harder. A slowing working-age population will increasingly be mirrored by a rising middle-class consumer population. This stimulates ´ordinary´ global trade fueled by higher consumption, whereas intermediate processing trade has started to stagnate (Lemoine and Ünal, 2017)[11]. Asia-driven wage pressures felt in the OECD are probably past, with China´s wages rising rapidly in both dollar and yuan terms (Figure 2).

Longstanding demographic developments that caused income and wealth inequality will now change. This is supported by the fact that several trends, which have been valid for forty years since the entry of post-communist states and emerging Asian countries into the market-economy organized world economy, have ended. Demographic prospects have Goodhart and Pradhan (2018) forecast for the coming decades: The ageing and shrinkage of the world's labour force (outside the Sahel Zone) and thus a higher share of wages in world income;  the decline in massive outsourcing to China and Eastern Europe, thus putting an end to price deflation for labour-intensive goods and hence provide scope for a more restrictive monetary policy in advanced economies, probably leading to asset price deflation; and the trend reversal in the global development of factor relations with an increase in the capital ratio in production and a reduction in returns on capital.

The negative distribution effects of Shifting Wealth are therefore likely to abate. Protectionist measures by OECD countries will not only hurt the emerging countries but also OECD countries themselves, especially if they lead to a global trade war. Cutting off trade is not the answer: Protectionism hurts those it is supposed to protect. To the contrary, “making trade work for all” is required[12]: Compensate the losers, not just with transfers from more progressive taxes. Active labour market policies, skills upgrading and regional policies (Südekum, 2018, op.cit.) as distribution tools are important policy tools as well. Rather than see the “rise of the rest” in terms of the “decline of the west”, policy makers should recognise that the net gains from increased prosperity in the developing world can benefit both rich and poor countries alike. Trade unions in the OECD area will find it easier to negotiate decent wages than they did until recently, with corresponding benefits for PAYG pension schemes.

Posted by ReibReisen at 18:19 No comments: