In an earlier blog post on how to deal with China´s acquisitions of German firms, I had opted for a case-by-case and sector-by-sector approach, rather than arguing indiscriminately that any acquisition attempt originating from China is a devious attempt to steal the crown jewels. Here I will specify conditions under which welfare considerations may call for reciprocity rather than unilateralism, despite the heavy potential cost of retaliation.

Meanwhile, the protectionist backlash against Chinese deals has hardened in Germany.  Berlin is now pushing for the EU to adopt rules to limit Chinese takeovers of European companies in areas such as defence, saying it wants to limit deals driven by China’s industrial policy. Sigmar Gabriel, Germany´s economic minister and Vice-Chancellor, did not even shy away from retroactively withdrawing its approval for a Chinese acquisition of Aixtron, a chipmaker. So much for Rules versus Discretion.

Lobbyists call for a tit-for-tat approach, or reciprocal liberalisation, in dealing with China. The seminal contribution to the tit-for-tat strategy as advocated by Gabriel and lobbyists has been developed by game theorist Axelrod (1984)[i], at a time when Japan´s investment in the US and Europe provoked a similar protectionist backlash as China´s acquisitions do now. Germany´s quid pro quo is likely to invite retaliation. Such retaliation is more likely in knowledge-intensive high-tech industries. Just as manufacturing is often regarded as providing broader political and economic benefits in developing countries, the location of high tech industries within own borders is a matter of ´strategic´ importance in advanced countries. Protectionism is easy in high-tech, R&D intensive industries because most governments want these industries because of an implicit belief of them being of ´strategic´ importance. Resistance to protectionist demands is therefore less likely.

Government opposition toward a certain transaction can be systematically predicted on the basis of national security sensitivity, economic distress, and reciprocity factors[ii]. Don´t forget that China created a “National Security Review” (NSR) process that mirrors the American system (CFIUS). Politicians are more likely to express opposition to “state-owned” enterprises attempting to acquire American companies. State ownership of the foreign firm—epically ownership by the Chinese government—is likely to increase fears that acquisition will create risks to both national security. When competition among rival suppliers is high and switching costs are low, however, there is no genuine national security rationale for blocking a proposed acquisition no matter how crucial the goods and services the target company provides[iii].

Lobbyists point to China´s restrictions on foreign investors, despite the fact that China has been liberalising its FDI regime continuously over the last decade. Western calls for reciprocity, while always present, seem to have intensified recently despite China´s progress as documented by the OECD (Table 1). This index of FDI restrictions, running from 0 (very open) to 1 (closed), indicates a composite of equity restrictions; screening and approval requirements; restrictions on foreign key personnel; and operational restrictions such as on land acquisition and capital repatriation. Despite all the noise from Western industry lobbies and politicians, China has steadily liberalised its capital account, from an index score of 0.56 in 2005 to 0.38 in 2015.  (As an aside, US President-elect Donald Trump calls China a ´currency manipulator´…)[iv].

It is Germany, not China, which has been identified among those countries where a pronounced worsening of commercial policy has been observed in the recent couple of years in the 20th Global Trade Alert Report (Evenett and Fritz, 2016[v]). A ranking of G20 members according to the total number of protectionist measures implemented since the first G20 Leaders’ Summit in November 2008 shows Germany at rank 6 out of 20. By contrast, Argentina and China are the only G20 members where no pronounced pick up is found in 2015 and 2016. For Australia, France, Germany, Italy, Saudi Arabia, the UK, and the USA, the 20th GTA Report finds “legitimate concerns about the protectionist dynamics building up in these G20 members”. Since November 2008, by number of times harmed by protectionist measures imposed by Germany which are currently in force, China has been hit by more than 60 measures. It is thus the world´s most harmed country by German protectionist measures[vi].

Since Adam Smith published his “Wealth of Nations” in 1776, the prevalent view among trade theorists has been in favour of unilateralism in commercial policy instead of some form of reciprocity. In its 2016 Report, the German Council of Economic Advisers also supported that Germany´s capital account stays unilaterally open, even in face of China´s FDI restrictions. The Council refers to “Free Trade for One” theorem, a term introduced by Jagdish Bhagwati (1989)[vii].
However, it can be shown in a simple trade model (Klodt, 2008)[viii] that general unilateralism can harm the host country when all three specific qualifications hold: The Chinese acquisition
i)  embodies a transfer of technology,
ii) deteriorates Germany´s terms of trade, and
iii) Germany has been a net exporter of the output produced by the acquired firm. 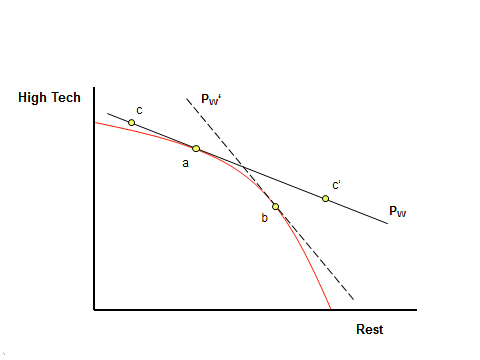 As long as foreign acquisitions do not impact PW, the country will be better off by not interfering in foreign acquisitions, analog to the “free trade for one” theorem. This presumption will hold for passive investors but not for the current wave of Chinese investments. If Chinese FDI in Aixtron, Kuka and others entails a transfer of T technology to China, the global supply of T goods will rise. The relative price of T/R will drop, the price line will turn from PW to PW´. As it can be safely assumed that the country is a net exporter, its initial position has been at c´ to the right of a. Its welfare sinks as a result of the technology transfer as it can´t reach c´ any longer.

The three qualifications elaborated in Diagram 1 should specifically be identified by the host government before it imposes restrictions on foreign acquisitions. These qualifications should help avoid discrimination, hence arbitrary intervention by governments, unstable conditions in world markets and commercial friction among nations. Bilateral determination of China´s fairness can be expected to lean towards being self-serving. What is tit and what is tat becomes problematic and contentious. The tit-for-tat strategy advocated by many is likely to be captured by those who seek protection. With globalization in retreat, there is a premium on unilateral liberalism in commercial policy.

Posted by ReibReisen at 15:28 No comments: