The growing dynamism of South-South[i] economic ties has been an essential element of Shifting Wealth since the 1990s. By 2010, developing countries accounted for around 42% of global merchandise trade, with South-South flows making up about half of that total (UNCTAD, 2013). South-South trade has risen fast both as part of extended global production networks and to satisfy the demands of a growing middle class. The dollar value of South-South trade multiplied more than 13 times to USD 4 trillion in 2016 since China joined the WTO early 2001 (Figure 1). In contrast to a drop in North-North trade and stagnation in South-North trade, South-South trade remained dynamic even in the post-crisis period.


Behind the impressive headline development of South-South trade lures quite an uneven pattern, however, as will be shown here in some detail:


Much developmental hope has been pegged to the rise in South-South trade, resonating with the former structuralist literature, inspired by the 1950 Prebisch-Singer hypothesis. The structuralists had argued that North-South trade would leave the South in a constant state of underdevelopment, as a result of deteriorating terms of trade, slow technology transfer and concentration on low-end products.  South-South trade, by contrast, would benefit developing countries by stimulating the product and geographical diversification of their exports, thus reducing vulnerability to output cycles in the North (Didier, 2017). The PGD 2010 (OECD, 2010) has pointed to further benefits of South-South relative to North-South trade: more trade creation than trade diversion in practice; better learning-by-doing effects; intermediate technology transfer; proximity; and eased integration into global value chains. So far so good. 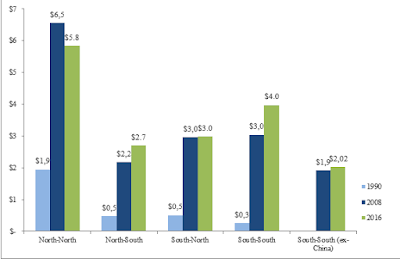 The outstanding role of China driving South-South trade and the role of booming oil and metal prices has often been obfuscated (but see Aksoy and Ng, 2014). However, the surge in South-South trade has to a large extent been driven by China, directly and indirectly, accounting for almost 50% of South-South exports. China´s directly measurable impact is clearly indicated by the right column in Figure 1, which depicts South-South trade excluding China: excluding China´s (direct) share from the trade data shows stagnation of South-South trade from 2008. While that trade was virtually nil in 1990, by 2008 it had reached USD 1.9 trillion, also thanks to rising raw material prices and Chinese infrastructure building. As it is difficult to disentangle raw material prices and capacity building from the trade data, these are China´s indirect drivers of South-South trade. In addition to its importance in Southeast Asia, China became Africa’s first commercial partner in 2009 (OECD African Economic Outlook 2017), while expanding commercial ties with Latin America too (OECD Latin American Economic Outlook 2016). 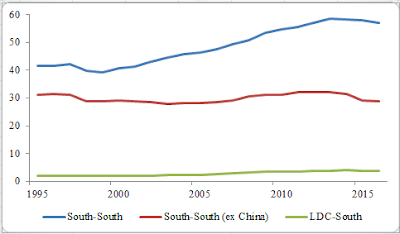 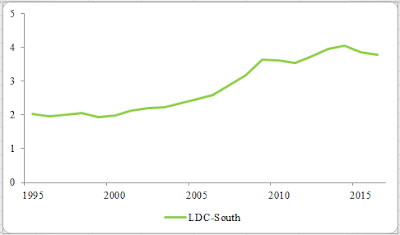 With South-South trade China-centric and China´s economy increasingly resembling advanced economies, whether or not South–South trade can still offer a developmental promise that might be missing in North–South trade is an open question. Therefore, Figure 3 zooms in on LDC-South trade shares 1995-2016 (as % of total Southern exports). That share doubled from 2% to 4 % during the past two decades, in particular since China´s WTO accession in 2001. The continuous rise of the poorest countries´ share in South-South trade – through peaks and troughs of the commodity cycle - should be indicative of positive development factors. Most likely it reflects improved infrastructure that helps facilitate trade but also regional integration (such as in in West Africa) and other South-South free trade agreements (Wignaraja, 2011). Whith China’s transitioning to the “new normal”, developing economies may increasingly profit from a transferral of manufacturing activities to low-cost destinations.

[i] South, North, and LDCs as defined by UNCTAD.
* Helmut Reisen, Scientific Advisor; Michael Stemmer, economist; both at the OECD Development Centre, Paris. This blog post is part of ongoing work for the PGD 2019.

Posted by ReibReisen at 18:21 No comments: