While empirical evidence on the relationship between FDI and development has been difficult to establish, the presumed development benefits have enjoyed much ‘banner waving’ and declamatory rethoric, not least by international organisations. Such positive rethoric has often stood in stark contrast to the widespread sentiment that foreign investment constitutes a sell out. In terms of the New Structural Economics promoted by  World Bank Chief Economist Justin Jifu Lin (2011)[1], one can investigate whether and how FDI can help economic (and human) development in a dynamic process that requires industrial upgrading, better trained people and  corresponding improvements in “hard” and “soft” infrastructure.
It is often assumed that Africa lags in hosting FDI compared to other regions. However, this belief reflects a hidden size bias and is based on the failure to scale the FDI inflows to local GDP.  After lagging behind the global trends in FDI flows during the 1990s, African countries have caught up to and even overtaken the average global FDI inflow-to-GDP ratio of middle and low income countries. This holds true for both Africa’s oil exporters and oil importers who hosted FDI inflows worth 4 to 5 percent of their respective national product since the mid 2000s. Since then, Africa (both oil and non-oil countries) is ahead of other developing regions in the amount of FDI it receives relative to the size of its economy, by more than two percentage points of GDP.
Nevertheless, attracting investment into diversified and higher-value-added sectors remains an important challenge for African countries. According to the Africa Competitiveness Report 2011, few African countries have been able to utilize FDI to produce growth beyond its effects on capital accumulation; indeed, some have failed to see positive effects even in this respect. Higher factor productivity, rather than mere accumulation, was noted only for the Cap Verde and Egypt in the report. In most African economies, firms continue to identify basic infrastructure deficiencies, especially in power provision, as the most severe constraint. This indicates a need for more investment in hard infrastructure in order to attract and absorb productivity-enhancing FDI.
The African Economic Outlook 2011 has analysed the role of emerging partners in Africa, a more recent phenomenon. Past failures to move beyond simple capital accumulation benefits of FDI in Africa pertain largely to FDI from traditional investors in OECD member countries. There is little evidence that FDI from emerging partners, particularly China,  is going to have a similarly meager developmental impact, in contrast to popular insinuations by China bashers.
Variation of infrastructure indicators in African countries heavy in Chinese investmenta
In the case of the emerging investors, FDI and other capital flows are less clear cut than for Western investors. Export credits, for example, play a much more significant role. Between 2005 and 2010, China invested $33.9 billion in African enterprises or greenfield projects.[2] During the same time, Chinese contractors implemented projects worth $37.6 billion, which can be assumed to be largely export-credit financed. The structure of Chinese investments and contracts reveals important complementarities. Investments are largely focused on resource extraction and metal processing, with 77% of investments targeting these categories. A full 63% of contract work, on the other hand, is concentrated in the area of transportation and power infrastructure. Thus, we see a mix of resource-seeking FDI and potentially efficiency-enhancing loans for hard infrastructure.
Using the World Bank World Governance Indicators, we find that on average, in the 9 African countries that received large Chinese investments (both in the form of contracts and the acquisition of shares) between 2005 and 2008 clearly did better in the areas of regulatory quality, government effectiveness, rule of law and corruption control. In addition, IFC Cost of Doing Business indicators which can be taken at least in part to represent changes in transportation infrastructure –days needed to import or export – indicate comparatively greater improvements in countries where China has made substantial investments.

* Based on a book chapter, co-authored with Jan Rieländer, OECD Development Centre, for Bertelsmann Foundation.
[1] Lin, Justin Y. (2011), „New Structural Economics: A Framework for Rethinking Development”, The World Bank Research Observer, Vol. 26, August, 193-221.
[2] Heritage Foundation. China Global Investment Tracker dataset, updated July 2011; https://thf_media.s3.amazonaws.com/2011/xls/China-Global-Investment-Tracker2011.xls. This amount is not strictly FDI, because the database does not provide the exact amount of shares purchased for all deals.
Posted by ReibReisen at 11:07 1 comment: 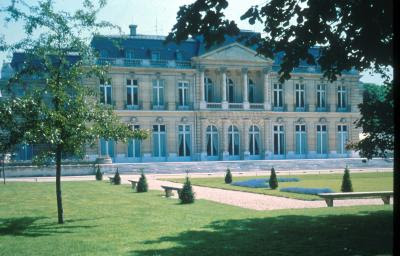 Posted by ReibReisen at 17:07 No comments:

PEGNet  - Poverty Reduction, Equity and Growth Network -  brings together researchers with an interest in issues revolving around the poverty-inequality-growth nexus in developing countries, and links them to the German development policy bodies. At the PEGNet Conference 2011 in Hamburg's splendid cityhall, I debated with Edward Brown (ACET, Ghana), moderated by Prof Asche (Leipzig U) the role of "China vs Paris" for Africa's development. Votes were taken before and after the debate; I managed to draw the audience of development researchers and officials toward a more China-friendly perspective. Justin Lin certainly approved...

Here is the debate in five videos:

Posted by ReibReisen at 10:58 No comments: