How a Rebalanced China Will Affect Africa 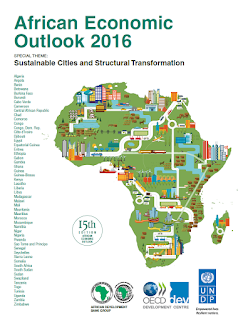 2015 has been a challenging year for much of Africa. Average growth of African economies weakened slightly in 2015 to 3.6% (down from annual 5% enjoyed since 2000). Total financial flows have decreased 12.8% to USD 188.8 billion (using UNCTAD rather than IMF estimates for FDI). Africa´s tax-GDP ratio tumbled to 17.9%, down from 18.7% in 2014. China´s slowdown produced rough headwinds for Africa where the gravity of growth is shifting from the resource rich West to the East. [Today, on 23rd May 2016, the African Economic Outlook (AEO) 2016 will be launched in Lusaka, Zambia. I have been asked to contribute, joint with Robert Kappel and Birte Pfeiffer. This post is a copy of one of our contributions. Please follow the launch event and access the study on www.africaneconomicoutlook.org from 9h CET.]

The slowing of output growth in major emerging economies has been associated with lower commodity prices. Next to supply factors, the marked decline in investment and (rebalanced) growth in China is depressing commodity prices, particularly in metals and energy. Three key factors have underpinned Africa’s good economic performance since the turn of the century: high commodity prices, high external financial flows, and improved policies and institutions. Macroeconomic headwinds for Africa’s net commodity exporters may imply that Africa’s second pillar of past performance – external financial inflows – will suffer as well.

Lower commodity prices could shift Africa’s centre of economic gravity from west to east, towards less commodity-dependent economies (Schaffnit-Chatterjee and Burgess, 2015). Investment finance could follow, reinforced by the peripheral outreach of China’s One Belt One Road initiative (OBOR), which includes East Africa for infrastructure finance. China’s new Silk Road Fund is targeting the economies along Africa’s east coast. This suggests a shift away from a traditional focus on securing natural resources towards a more exploratory focus on opportunities for a manufacturing hub in the African region.

A recent World Bank (2015) study uses a general equilibrium model to quantify how lower and more balanced growth in China might affect sub Saharan Africa’s (SSA) future growth (Figure 2).  The model simulated the effects of a slowdown, a rebalancing and the combined effect of both. The combined effect of China’s lower growth and its rebalancing on sub-Saharan Africa is positive, as the positive effect from the more balanced growth outweighs the negative effect from lower growth. According to the simulation, by 2030, China’s transition will increase the level of GDP in sub-Saharan Africa by 4.7% relative to the baseline. Countries best placed to export consumer goods to China, including agricultural products, will benefit most from China’s lower but more balanced growth. According to this analysis, Zambia, a main copper exporter, is the only country that will not gain from China’s switch to a more consumption-based growth model. However, this simulation does not consider possible growth effects in Africa from additional Chinese direct investment. To the extent that rising wages in China lead to higher unit labour cost, China’s external competitiveness in low end manufactures will be eroded. China could thus expand its current presence in Africa’s special economic zones, or encourage the creation of new ones. Such positive growth effects from foreign direct investment (FDI) would increase as African countries reduce bottlenecks in infrastructure and energy supply. 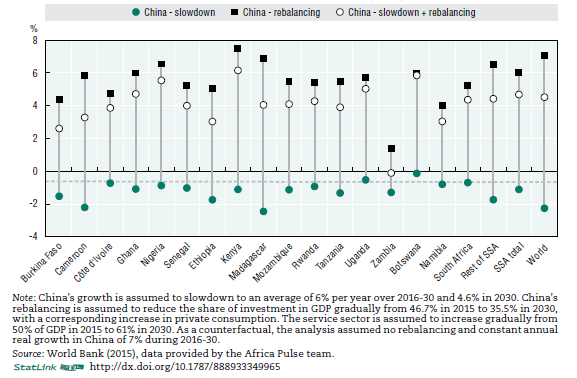 Trade linkages impact on financial flows via trade credits and indirectly via corporate profits.
China’s trade engagement with Africa has risen markedly since 2000. China has crowded out other trade partners in relative terms, except for India, which tripled in Africa’s export share (Table 1). In absolute terms, the trade dynamic of emerging partners was crucial in quadrupling African exports from USD 142.4 billion in 2000 to USD 566.6 billion in 2014. As a bloc, the group of emerging partners now buys more African exports than advanced countries. Only 15 years earlier, their share represented one fifth of total African exports. In terms of trade dynamics and trade shares, China and India now account for a sizeable portion of Africa’s export earnings.

The drop in commodity prices can undermine Africa’s resource mobilisation. The price channel, by which the EME slowdown impacts Africa’s financing, reinforces the effects of the trade channel. From the perspective of finance, the impact of changes in commodity prices is unlikely to be symmetric or a zero-sum game. The recycling of large surpluses in the current account of oil exporters (including African) that has benefited African financing will not be paralleled by corresponding surpluses of oil importers.

Tax revenues may also be negatively affected in a number of ways. Many countries in Africa rely on trade taxes (tariffs) to sustain government revenues, so collapsing commodity exports will worsen fiscal positions. Unlike in non-resource-rich Africa, resource rents accounted for more than 80% of total tax collection in 2013 and 20% of GDP in oil-rich Algeria, Angola, Congo, Equatorial Guinea and Libya (AfDB/OECD/UNDP, 2015). Conversely, non-resource-rich countries broadened their tax base and raised tax collection through direct and indirect taxes. A generalized slump that affects consumption will lower tax revenues also in those countries.

Financial flows to Africa may be harmed by depleted EME reserves. The liquidity-supply channel has turned markedly since mid-2014. From a total of USD 1.8 trillion in 2000, global foreign exchange reserves reached a peak of USD 12 trillion in mid-2014. The fast accumulation of global economic imbalances over the 2000s brought about a significant shift in the world’s wealth in favour of  EMEs running surpluses (OECD, 2010). China alone stockpiled reserves from USD 170 billion in 2000 to USD 4 trillion in August 2014, in order to contain appreciation pressures. Since mid-2014, both foreign exchange reserves and sovereign wealth fund (SWF) assets in emerging economies have dropped as a result of lower commodity prices and lower gross capital inflows. Net sales of foreign reserves by China, the Russian Federation and Saudi Arabia accounted for most of the drop. From their peak, these three countries alone have lowered foreign exchange reserves by USD 1.5 trillion. These countries have been prominent emerging investors in Africa in the past (AfDB/OECD/UNDP, 2011).