Sobering Results of the G20 Compact with Africa

The G20 Africa Partnership was launched in 2017 to build on and streamline a proliferation of regional and international strategies in order to ensure alignment, coherence and ownership. While there has been a long history of G-7/8/20 initiatives relating to Africa, the Compact with Africa (CwA) is the first comprehensive initiative between the G20 and Africa.

Two years after inception, the results of the CwA are sobering.

Why? It is not that ambition, effort and input have been lacking. The CwA’s has aimed at levering private infrastructure finance via blended finance to facilitate subsequent foreign direct investment (FDI) flows. The hope was that better governance would help attract those private flows.

Well, governance did improve. Table 1 shows three governance indicators (IFC Doing Business, Bertelsmann Transformation Index, and Transparency International Perceived Corruption) emphasised by the German administration. The twelve CwA countries today are generally managed better than in the period just prior to the launch of the Compact in 2017.


https://www.transparency.org/cpi2018.
Notes: EoDB = Ease of Doing Business score is reflected on a scale from 0 to 100, where 0 represents the lowest and 100 represents the best performance ever worldwide. BTI = Bertelsmann Stiftung Transformation Governance score from 1 (lowest) to 10 (best), a composite of scores for steering capacity, resource efficiency, consensus-building and international cooperation. The Transparency International Corruption Perception Index (CPI) use a scale of 0 to 100, where 0 is highly corrupt and 100 is very clean.

While governance improved, neither private cross-border flows nor local resource mobilisation have followed. The CwA architects had initially conceived a sequence of private cross-border flows to the Compact countries that would first stimulate portfolio flows into infrastructure from institutional long-term investors such as pension funds, life insurance companies and sovereign wealth funds.  In turn, as infrastructure bottlenecks were slowly removed, it was hoped that foreign direct investment flows would follow. 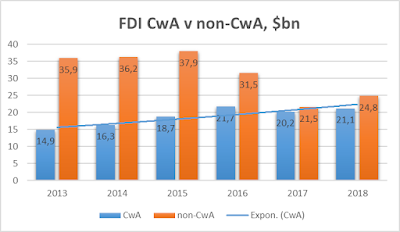 The UNCTAD data available since June do not give rise to a jubilatory interpretation of trends in gross FDI inflows since the launch of the CwA initiative. To the contrary, and with all the caveats that apply to the volatile nature of FDI data, if anything there is a tendency for gross FDI inflows to continuously shrink in CwA countries since 2016. This observation holds both for the amount of flows measured in US dollar and as a fraction of gross fixed capital investment in the unweighed average of the twelve CwA partner countries.

If the CwA has not been sussessful so far in stimulating cross-border flows into Compact partners, have they instead mobilised higher national savings to finance transformative investment via gross domestic capital formation (GFCF)? Again, the answer is rather negative for the unweighed average of the twelve countries. To arrive at data on the national savings-GDP ratio as a measure of domestic resource mobilisation (DRM) for the most recent period 2016-18, I had to rely on national account identitites and current account imbalances for deriving indirectly at the data presented in Table 2.

Table 2 documents that for the average of the twlve CwA countries neither national savings nor gross fixed investment rose since the CwA launch. Actually, the national savings effort weakened on average. The savings ratio rose only in Egypt and Rwanda since 2016.

The verdict on the CwA two years after is that the anticipated private cross-border equity flows did not materialise nor did domestic resource mobilisation. Consequently, public debt dynamics often could not be tamed. The positive tone of the CwA monitoring reports sounds hollow so far in view of the macroeconomic data recorded here.