The Compact with Africa (CwA)[1] initiative is the main pillar of the G20 Partnership with Africa. It initially started in March 2017 as an initiative of the G20 Finance Track to promote private investment in the African continent, with a focus on levering private infrastructure finance via blended finance to facilitate subsequent foreign direct investment (FDI) flows. Ludger Schuknecht and coauthors, then affiliated at top positions with the German ministries of finance and cooperation, have succinctly outlined paradigm, motivation, work mechanics and objectives of the CwA[2]. The concept for the CwA is simple: Good governance is conceived as a prerequisite for enhanced private foreign investment for infrastructure, which in turn helps attract foreign direct investment inflows. To these ends, the international community contributes to the development of good economic institutions by investing in a "compact" with reform-minded poor countries.

Notwithstanding the existing Monitoring Reports posted on the CwA website, hard empirical evidence on output indicators for governance and instituitional quality, portfolio flows trigged for infrastructure as well as green-field FDI (and jobs) created in the Compact countries is still mostly absent, to my knowledge. Official CwA documents have rather focused on input indicators (such as meetings or investment plans) and anecdotal evidence to assess the progress of the Initiative. This blogpost aims at a first, preliminary (and, I admit, premature) presentation of output indicators for the Compact partner countries. (So informed comments are very welcome.). It is not intended (nor possible at this early stage) to present hard empirical evidence to establish causality. If anything, the data presented might be suggestive of a structural break of governance scores and private foreign flows in the compact countries before and after the CwA was launched in March 2017.

The CwA evokes Barrack Obama´s 2006 book ´The Audicity of Hope´, because the Compact postulates that its mechanics can spur private foreign investment and sustainable transition even in low-income countries. Kappel & Reisen (2017) have argued earlier that such premise is ´unsuitable´ for low-income countries[3]. The brilliant Graph 1 (from OECD, 2019)[4] seems to support that scepticism. The OECD graph presents the evolution of the external financing mix for developing countries during the transition process. Its focus is on the percentage contribution of external resources (left y axis), while including the relative importance of domestic resources (right y axis), and shows the evolution of the mix as income per capita increases (x axis).

Graph 1: Financing Mix during the Transition from LIC to HIC Status 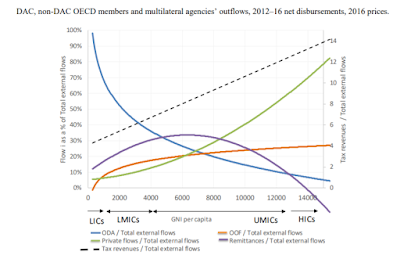 As the graph shows, the percentage share of private flows to total external flows for LICs and LMICs has on average been well below 10% during the 2012-2016 preceding the Compact. Private external flows start to dominate the external financing mix (with more than 50%) only once countries graduated from upper-middle income (UMICs) to high-income (HICs), with a annual GNI per capita of $12,056 or more[5].

To put the ´Audacity of Hope´ of the CwA into perspective, note that all twelve Compact countries produce a yearly income per head at such low levels that they are either classified as low-income countries (LICs) or lower-middle-income countries (LMICs), as shown in Table 1.

Although the mean annual per capita income varies widely across the group of Compact countries – from $590 (Burkina Faso) to $3,490 (Tunisia) – they all remain widely below income levels where an important contribution of private external flows can be reasonably expected.

Moreover, some Compact countries (Ethiopia, Ghana) have been assessed recently under ´high´ risk of debt distress in the IMF/WB Debt Sustainability Framework. Debt vulnerability should further mitigate the role of external private flows to fund a country, if it comes in the form of debt-creating flows, including through blended finance.

Next to annual data for gross national income per capita (GNI/cap) and the Income Status classification by the World Bank, Table 1 presents governance scores for the two years preceding the CwA launch (2015 and 2016) and the two subsequent years (2017 and 2018, if available):
-          The World Bank´s controversial ´Ease of Doing Business´ (EoDB) index measures the degree to which the regulatory environment is conducive to the starting and operation of a local firm. The index runs from 0 to 100 (perfect). The ease of doing business score benchmarks economies with respect to regulatory best practice, showing the absolute distance to the best regulatory performance on each Doing Business indicator.  When compared across years, the ease of doing business score shows how much the regulatory environment for local entrepreneurs in an economy has caught up relative to best practice.
-          The World Bank's Country Policy and Institutional Assessment (CPIA) index measures the institutional strength of a country, with 1=low, and 6=high. It scores countries against a set of 16 criteria grouped in four clusters: economic management, structural policies, policies for social inclusion and equity, and public sector management and institutions. Until mid 2018, IMF and World Bank have been relying exclusively on the CPIA to classify countries’ debt-carrying capacity in their joint Debt Sustainability Framework for low-income countries (DSF). While other economic variables have been added since then, the CPIA still provides a useful characterization of debt vulnerabilities (including those from domestic debt and market financing).
Encourageingly, the ´Ease of Doing Business´ (EoDB) indicators significantly improved on average (red numbers) in the Compact countries from the pre-CwA period 2015-16 to thereafter. However, the CPIA scores did not[6]. While we have to wait for newer CPIA scores, I cannot reject the null hypothesis that the first CwA objective has been reached – to provide incentives for compact countries to improve business conditions for private investment.

Table 2 presents more sobering findings as to the private flows, which the Compact may have triggered, by comparing the mean of the two years preceding the CWA launch with the mean of the two years thereafter. The table provides
·       preliminary data from the Private Participation in Infrastructure (PPI) Project database of the World Bank, a comprehensive indicator of credit and portfolio flows that fund 6,400 infrastructure project in 139 low- and middle-income countries; and
·       Foreign direct investment (FDI, net inflows), assembled from the International Monetary Fund, Balance of Payments database, supplemented by data from the United Nations Conference on Trade and Development and official national sources.

The sum of PPI actually fell slightly after the CwA launch in the Compact countries. Exceptions are Rwanda and in particular Egypt where PPI soared in terms of size of annual flows and number of projects. A third of the dozen Compact countries – Benin, Ethiopia, Togo and Tunisia – did not receive any private foreign infrastructure funding after the CwA launch according to the PPI database.
The sum of mean annual FDI flows, by contrast, increased by US$ 700 million after the CwA launch, to a total of US$ 21 billion during the years 2017-18. Again, Egypt received the bulk of that sum (as it had done before the CwA launch), roughly US$ 7.5 billion. Compared to the two-year period preceding the CwA launch, ten out of twelve Compact countries recorded higher annual FDI flows.
Clearly, the CwA results as measured by output indicators are mixed two years after the launch of the initiative. But they are not outright negative. More perseverance by private firms and investors, risk-sharing development finance institutions and authorities both local and foreign is needed. Importantly, however, the audacity of hope that carries the Compact seems to be justified so far.