China's rise since the 1980s has brought an era of low inflation and real interest rates; it also stimulated emerging economies. This combination has resulted in high prices for equities, real estate and commodities. The impact on personal income distribution has been positive globally, but negative within most countries. In a highly acclaimed book, Charles Goodhart and Manoj Pradhan announce the end of the golden age[1]. Changes in demography will reverse decades of trends: declining growth in wages and inflation, falling interest rates, and greater inequality between countries, while inequality is falling in many countries. 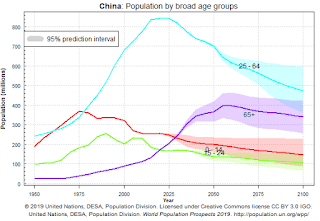 Their forecast is not that new. The far-reaching and well written book by Goodhart and Pradhan is definitely to be recommended. But neither are its theses "original" nor "surprising", as the blurb suggests. In large parts, the thesis could have been written at the OECD Development Centre. Indeed, they were. Several publications and lectures since 2005 bear testimony to this; they have been dubbed ShiftingWealth [3] by the OECD in English; the German equivalent was christened Weltneuvermessung [4].

Our core argument since 2005 was that the integration of China and India into the world economy effectively doubled the potential labour force to be integrated into the world market economy. China brought in 750 million people of working age, India 450, and if we add the former "Eastern Bloc", the additional labour force amounted to 1.5 billion[5]. Real GDP growth clearly depends on the number of workers, either through the skills they deploy or their ideas. A simple production function, in which capital contributes one third of income (the rest is provided by low skilled labour and know-how) translates the demographic shock into wage effects. Since doubling the global labour supply halves the ratio of capital to labour, the productivity of unskilled labour is reduced - by just over 16 per cent. Equilibrium wages, which are clearing the labour market, fall by the same percentage. Foreign trade theory and its central globalisation theorem (Stolper-Samuelson) predicted that lowering the prices of wage-intensive goods would result in trimmed wages (for low skilled work) and richer profits.

Meanwhile, China's labour reserve army migrated from the hinterland, where employment is low-productive and mostly seasonal, to the productive urban area. This migratory flow was supplemented by those who had been laid off from unprofitable state enterprises. A dual labour market model from the 1950s, which we owe to Nobel Prize winner Arthur Lewis, illustrated the consequences: as long as the surplus of unproductive labour in rural areas had not melted away, pressure on real wages remained[6]. This kept profits high in China's modern sector - an incentive to reinvest there.

Meanwhile, rural labour supply has largely been redirected to the modern sector; in China, scarcity prices for labour are again being paid, and wages are rising. This is not only imminent, as Goodhart & Pradhan postulate, but has been happening for several years now (Fig. 2). 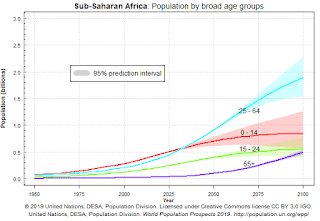 As for the future, it is not only China's demography that will determine the global level of labour-intensive goods and services, inflation and interest rates via subsistence wages of underemployed people. Africa and South Asia are at the forefront here, but are largely ignored by Goodhart and Pradhan. The United Nations predicts that Africa's working age population (15-24; 25-64) will rapidly increase [7]to over one billion people by 2050; by 2100 it will probably be two billion (Fig.3).

So, the demographic reversal may not have started after all.

Certainly, it is unlikely that the two 'young' regions will integrate into the global economic division of labour as successfully as China has done since 1980. But the massive increase in the job-seeking population in Africa and South Asia will overshadow the comparatively small decline in China's working age cohort by 2050. Despite the book's title, demography is a weak aspect of Goodhart and Pradhan's book. 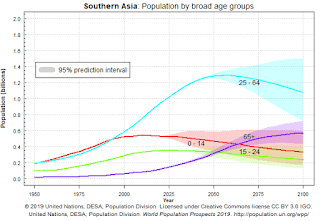 Goodhart and Pradhan expect real interest rates to rise as a result of the demographic changes underway in the industrialised countries and in China. Their macro and financial orientation leads them astray when they explain the long fall in global real interest rates with China's hitherto high propensity to save, the reinvestment of China's supplier credits in US government bonds and the ageing of the population in developed countries. Some of the arguments are reminiscent of the empirically rejected Bernanke thesis that international current account imbalances can be explained[8] by the Asian glut of savings.

In explaining high savings in the Asian region, on the other hand,[9] an observation developed by Amartya Sen (1990) has received strong empirical support: the son preference (measured as the son-girl ratio, the result of abortion of female fetuses). For a sample of 22 countries, the OECD found[10] a strong finding: savings rates rose from 21% with a low level to 51% with a strong son preference. For China, where the sexes were and remain particularly unequally distributed due to the one-child policy (son/girl 1.2), Shang-Jin Wei[11]demonstrated a close empirical connection between savings rate and son preference in spatial and temporal dimensions. How will this gender effect, ignored by Goodhart and Pradhan, affect the propensity to save and interest rates in the future? So far, there is little evidence of the abandonment of gender-selective abortion in China or India.

Another structural explanation for persistently high savings rates[12] is the high level of corporate savings in manufacturing due to undervalued exchange rates. In the context of underdeveloped financial markets, the internal financing of Asian companies is dominated by the retention of profits or the creation of provisions. However, massive sustained appreciation of the weighted external value of the currency can translate into lower corporate savings, especially in emerging markets[13].

Conclusion: Will Goodhart and Prahan's thesis be confirmed that changes in global demography will reverse decades-long trends in interest rates, wages and inflation? Much will depend on how successfully the young but poor subcontinents of South Asia and Africa can integrate into the global economy. It cannot be ruled out that the effectively effective global labour supply will continue to cap wages and prices for labour-intensive goods and services. High savings rates, and thus low interest rates, will continue to accompany us even if mass abortions of female fetuses are carried out in Asia and companies there remain self-financed.

[1] Charles Goodhart & Monoj Pradhan (2020), The Great Demographic Reversal: Ageing Societies, Waning Inequality, and an Inflation Revival, London: Pelgrave Macmillan, August. The book has several predecessors that can be traced back to 2015 (with Pratyancha Pardeshi). Cf. with http://eprints.lse.ac.uk/66775/.

[7] In highly developed countries, the 25-64 age cohort represents the working age population. In poor countries, this restriction would be inadmissible because of the shorter period of education and the importance of the informal sector. The 15-24 age cohort is therefore also relevant for labour supply.